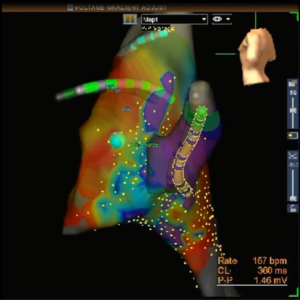 AVNRT is the most common arrhythmia in adults until the onset of Atrial Fibrillation. Though this arrhythmia is commonly treated by ablation, complications and recurrences continue to occur.  If we can demonstrate that voltage and propagation wave mapping requires less ablation sites, decreases procedure time, and results in a decreased risk of complication/recurrence, this 3D mapping radiation free technique may become the gold standard approach for ablation of this arrhythmia.

While a conceptual construct for understanding AVNRT has evolved over the years, the subtleties of the pathophysiologic mechanism leading to its occurrence is undefined. Approaches for ablation of the slow AV nodal pathway differ among pediatric centers. Two commonly used techniques involve: 1) an anatomical/electrogram approach based on physical position of the ablation catheter and the electrogram morphology (Anatomical/electrogram Technique), and the more recent 2) voltage and propagation mapping to ablate over a site of low voltage and late activation in the triangle of Koch, as often seen at a site of a propagation wave collision.  (Voltage/Propagation technique).

Though recent studies have suggested that voltage and propagation mapping can provide an accurate radiation free technique for localization of the slow pathway, the studies are retrospective and not compared to the more typical anatomical/electrogram based technique.  We propose a prospective comparative study of the effectiveness and safety of these two techniques for modification of slow AV nodal pathway.

Define and compare the effectiveness and safety of two technical approaches to the ablation of slow AV nodal pathway conduction in the treatment of AVNRT.

The effectiveness and safety of modifying slow AV nodal pathway conduction underlying AVNRT can be improved using voltage and propagation mapping to identify an area of low voltage and late activation, often at a site of propagation wave collision.  This voltage/propagation mapping ablation technique compared will be compared to the current anatomical/electrogram ablation technique. The number of ablations necessary to achieve successful modification of slow AV nodal pathway conduction will be our primary end point. Secondary end points will include: the length of time needed to modify slow AV nodal pathway conduction, the recurrence rate of AVNRT, and the incidence of acute injury to the AV node that occurs during the ablation procedure will be compared.